The essence of the color purple, amethyst is beautiful enough for crown jewels yet affordable enough for class rings.

Amethyst was as expensive as ruby and emerald until the 19th Century, when Brazil’s large deposits were discovered. It was believed to prevent intoxication—amethystos means “not drunk” in ancient Greek. Today, as the most valued quartz variety, amethyst is in demand for designer pieces and mass-market jewelry alike, and its purple to pastel hues retain wide consumer appeal.

Because of its wine-like color, early Greek legends associated amethyst with Bacchus, the god of wine. Other legends reflected beliefs that amethyst kept its wearer clear-headed and quick-witted in battle and in business affairs. Because amethyst was associated with wine, it was believed that wearing amethyst prevented drunkeness.Fine amethysts have been set in religious jewelry and royal crown jewels for ages. It was once considered equal in value to ruby, emerald, and sapphire. It’s no wonder that fine amethyst adorns the fingers of bishops as well as the coronation regalia of British royalty.

Amethyst is the birthstone for February and one of the emblems of the twelve apostles. Is the gem for the 6th and 17th wedding anniversaries. 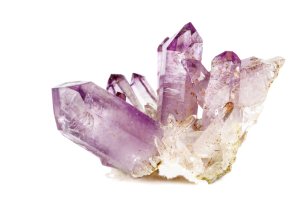 In gem localities like Brazil, amethyst sometimes forms in hollow, crystal-lined geodes so big you can stand in them

Even fine amethyst has a modest price tag. Large gems remain affordable as price per carat does not rise dramatically with larger size.

In Bolivia, amethyst and citrine occur in the same crystal. The unique gems, called ametrine, are half purple and half yellow.

The finest amethyst color is strong reddish purple to purple with no visible color zoning.

Most amethyst doesn’t have inclusions you can see without magnification.​

Amethyst is cut into a variety of standard calibrated shapes, including rounds and ovals.

Amethyst is available in all size ranges for setting into a variety of jewelry styles.​