Our laboratories are currently open. Click here for more information on how we are operating with Coronavirus (COVID-19).
Skip to Content

Diamond formation requires exposure of carbon-bearing materials to high pressure, ranging approximately between 45 and 60 kilobars, but at a comparatively low temperature range between approximately 1652–2372 °F (900–1300 °C). These conditions are known to be met in two places on Earth; in the lithospheric mantle below relatively stable continental plates, and at the site of a meteorite strike.

The conditions for diamond formation to happen in the lithospheric mantle occur at considerable depth corresponding to the aforementioned requirements of temperature and pressure. These depths are estimated to be in between 140–190 kilometers (90–120 miles) though occasionally diamonds have crystallized at depths of 300-400 km (180-250 miles) as well.

The rate at which temperature changes with increasing depth into the Earth varies greatly in different parts of the Earth. In particular, under oceanic plates the temperature rises more quickly with depth, beyond the range required for diamond formation at the depth required. The correct combination of temperature and pressure is only found in the thick, ancient, and stable parts of continental plates where regions of lithosphere known as cratons exist. Long residence in the cratonic lithosphere allows diamond crystals to grow larger.

Through studies of carbon isotope ratios (similar to the methodology used in carbon dating, except with the stable isotopes C-12 and C-13), it has been shown that the carbon found in diamonds comes from both inorganic and organic sources. Some diamonds, known as harzburgitic, are formed from inorganic carbon originally found deep in the Earth’s mantle. In contrast, eclogitic diamonds contain organic carbon from organic detritus that has been pushed down from the surface of the Earth’s crust through subduction before transforming into diamond. These two different source carbons have measurably different 13C:12C ratios. 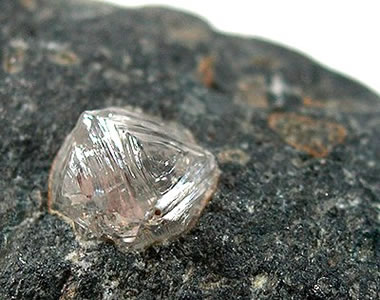 Diamonds occur most often as euhedral or rounded octahedra and twinned octahedra known as macles or maccles. As diamond’s crystal structure has a cubic arrangement of the atoms, they have many facets that belong to a cube, octahedron, rhombicosidodecahedron, tetrakis hexahedron or disdyakis dodecahedron . The crystals can have rounded off and unexpressive edges and can be elongated. Sometimes they are found grown together or form double “twinned” crystals grown together at the surfaces of the octahedron. These different shapes and habits of the diamonds result from differing external circumstances. Diamonds (especially those with rounded crystal faces) are commonly found coated in nyf, an opaque gum-like skin.

Diamonds can also form in other natural high-pressure events. Very small diamonds, known as microdiamonds or nanodiamonds, have been found in meteorite impact craters. Such impact events create shock zones of high pressure and temperature suitable for diamond formation. Impact-type microdiamonds can be used as one indicator of ancient impact craters.

Not all diamonds found on earth originated here. A type of diamond called carbonado diamond that is found in South America and Africa was deposited there via an asteroid impact (not formed from the impact). These diamonds formed in the intrastellar environment. Presolar grains in many meteorites found on earth contain nanodiamonds of extraterrestrial origin, probably formed in supernovas. White dwarf stars have been described as having a carbon core and were hyped in a 2004 news headline as diamond.

Diamond-bearing rock is brought close to the surface through deep-origin volcanic eruptions. The magma for such a volcano must originate at a depth where diamonds can be formed, 150 km (90 miles) deep or more; this is a relatively rare occurrence. These typically small surface volcanic craters extend downward in formations known as volcanic pipes. The pipes contain material that was transported toward the surface by volcanic action, but was not ejected before the volcanic activity ceased. During eruption these pipes are open to the surface, resulting in open circulation; many xenoliths of surface rock and even wood and/or fossils are found in volcanic pipes. Diamond-bearing volcanic pipes are closely related to the oldest, coolest regions of continental crust (cratons). Not all pipes contain diamonds, and even fewer contain enough diamonds to make mining economically viable. 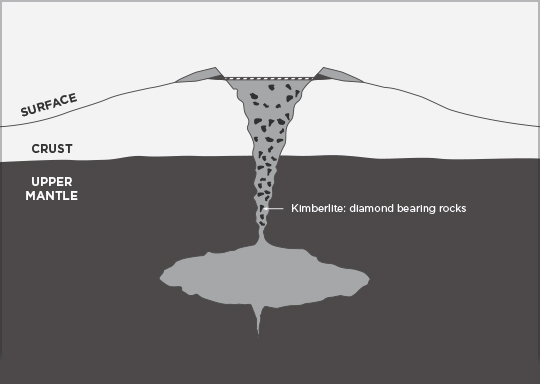 The magma in volcanic pipes is usually one of two characteristic types, which cool into igneous rock known as either kimberlite or lamproite. The magma itself does not contain diamond; instead, it acts as an elevator that carries deep-formed rocks (xenoliths), minerals (xenocrysts), and fluids upward. These rocks are characteristically rich in magnesium-bearing olivine, pyroxene, and amphibole minerals which are often altered to serpentine by heat and fluids during and after eruption. Certain indicator minerals typically occur within diamondiferous kimberlites and are used as mineralogic tracers by prospectors, who follow the indicator trail back to the volcanic pipe which may contain diamonds.

Once diamonds have been transported to the surface by magma in a volcanic pipe, they may erode out and be distributed over a large area. A volcanic pipe containing diamonds is known as a primary source of diamonds. Secondary sources of diamonds include all areas where a significant number of diamonds, eroded out of their kimberlite or lamproite matrix, accumulate because of water or wind action. These include alluvial deposits and deposits along existing and ancient shorelines, where loose diamonds tend to accumulate because of their approximate size and density. Diamonds have also rarely been found in deposits left behind by glaciers (notably in Wisconsin and Indiana); however, in contrast to alluvial deposits, glacial deposits are not known to be of significant concentration and are therefore not viable commercial sources of diamond