Ruby is the most valuable variety of the corundum mineral species, which also includes sapphire.

Ruby is the most valuable variety of the corundum mineral species, which also includes sapphire. Rubies can command the highest per-carat price of any colored stone. This makes ruby one of the most important gems in the colored stone market.

In its purest form, the mineral corundum is colorless. Trace elements that become part of the mineral’s crystal structure cause variations in its color. Chromium is the trace element that causes ruby’s red, which ranges from an orangy red to a purplish red.

The strength of ruby’s red depends on how much chromium is present—the more chromium, the stronger the red color. Chromium can also cause fluorescence, which adds to the intensity of the red color.

The most renowned rubies, like those from Myanmar, the Himalayas, and northern Vietnam, typically form in marble. They’re found in layers that are distributed irregularly within the surrounding marble.

Ruby is the birthstone for July and the gem for the 15th and 40th anniversaries..

Marble forms as part of the metamorphic (rock-altering) process, when heat and pressure from mountain formation act on existing limestone deposits. Marble has low iron content, so the rubies that originate in marble (called “marble-hosted” by gemologists) lack iron. Because of this, many have an intense red color.

In addition, rubies found in marble typically fluoresce red under ultraviolet light—even the ultraviolet light in sunlight. Fluorescence can make a ruby’s color even more intense and increase its value.

In other locations, rubies can be found in basalt rocks. Rubies from these sources can have higher iron content, which can make the rubies darker and less intense in color. Higher iron content in the chemical makeup of a ruby can also mask the red fluorescence, eliminating that extra glow of red color seen in marble-hosted rubies

Red is the color of our most intense emotions—love and anger, passion and fury. It’s associated with objects of power and desire—like fast cars and red roses. Early cultures treasured rubies for their similarity to the redness of the blood that flowed through their veins, and believed that rubies held the power of life.

Ruby is one of the most historically significant colored stones. Rubies are mentioned four times in the Bible, in association with attributes like beauty and wisdom. 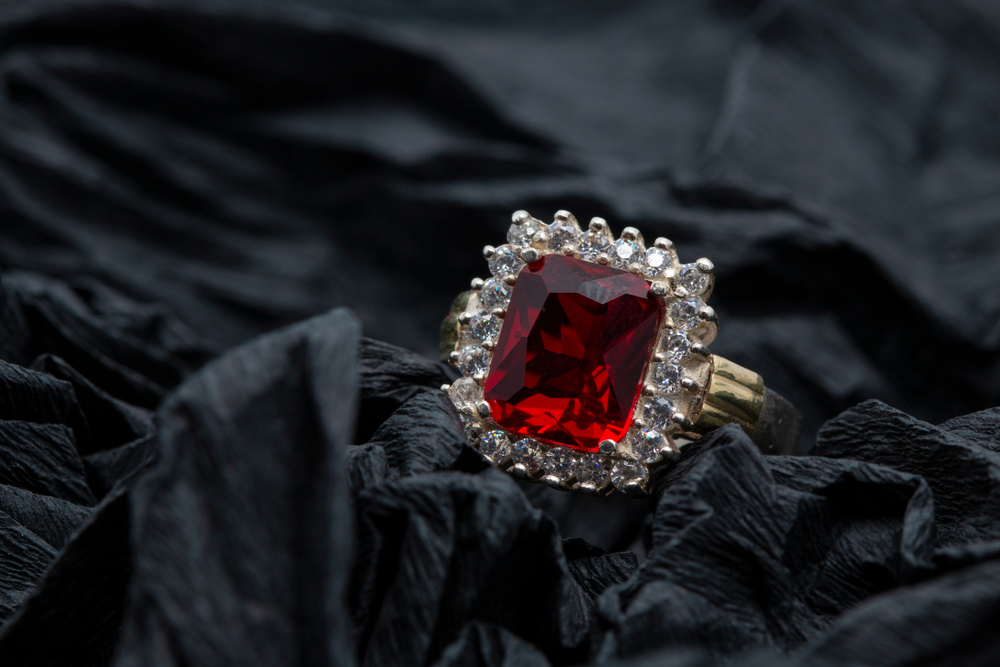 In the ancient language of Sanskrit, ruby is called ratnaraj, or “king of precious stones.”

In the first century AD, the Roman scholar Pliny included rubies in his Natural History, describing their hardness and density. Ancient Hindus believed that those who offered fine rubies to the god Krishna were granted rebirth as emperors. 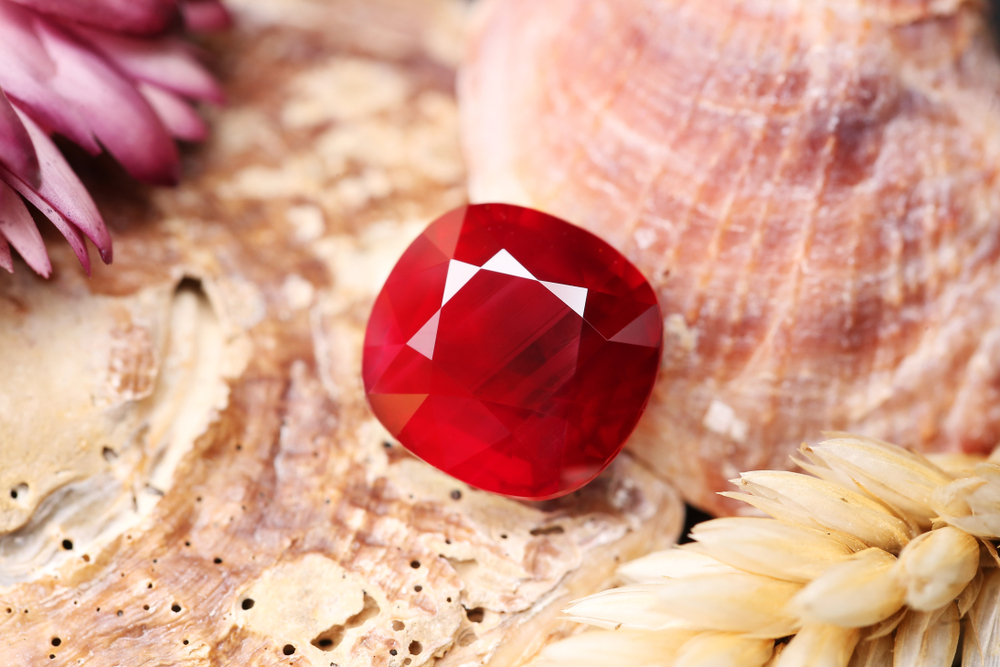 Hindus divided ruby into four castes, calling the true Oriental ruby a Brahmin. Someone in possession of a Brahmin was believed to have the advantage of perfect safety.

Ruby has accumulated a host of legends over the centuries. People in India believed that rubies enabled their owners to live in peace with their enemies. In Burma (a ruby source since at least 600 AD—now called Myanmar), warriors possessed rubies to make them invincible in battle. However, it wasn’t enough to just wear the rubies. They had to insert them into their flesh and make them part of their bodies.

The name ruby comes from the Latin word ruber, which means “red.” The glowing red of ruby suggested an inextinguishable flame burning in the stone, even shining through clothing and able to boil water.

Ruby has been called the most precious of the 12 stones created by God.

Ruby retained its importance with the birth of the western world and became one of the most sought-after gems of European royalty and the upper classes. Many medieval Europeans wore rubies to guarantee health, wealth, wisdom, and success in love.

Desire for ruby is just as great today as it always has been. As a symbol of passion, ruby makes an ideal romantic gift. Consumers are drawn to the lush color because it also signifies wealth and success.

Fine ruby glows with intense red in sunlight thanks to red fluorescence, which intensifies its red color.

The first laser was created in1960 using the red fluorescence light emitted by ruby.

Color is the most significant factor affecting a ruby’s value: Fine gems are a pure, vibrant red to slightly purplish red.

If a ruby’s inclusions affect its transparency or brilliance they reduce the gem’s value significantly.

Rubies are commonly fashioned as mixed cuts, which have brilliant-cut crowns and step-cut pavilions.

Fine-quality rubies over one carat are very rare and price goes up significantly as size increases.