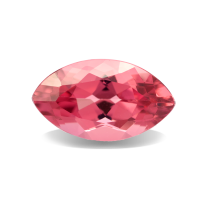 Tourmalines come in a wide variety of exciting colors. In fact, tourmaline has one of the widest color ranges of any gem species, occurring in various shades of virtually every hue.

Many tourmaline color varieties have inspired their own trade names:

Some tourmalines also show a cat’s-eye effect called chatoyancy. Cat’s-eye tourmalines are most often green, blue, or pink, with an eye that’s softer and more diffused than the eye in fine cat’s-eye chrysoberyl. 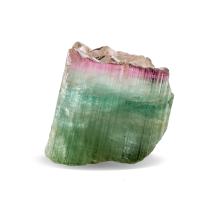 This is because, in tourmaline, the effect is caused by numerous thin, tube-like inclusions that form naturally during the gem’s growth. The inclusions are larger than the inclusions in cat’s-eye chrysoberyl, so the chatoyancy isn’t as sharp. Like other cat’s-eyes, these stones have to be cut as cabochons to bring out the effect. 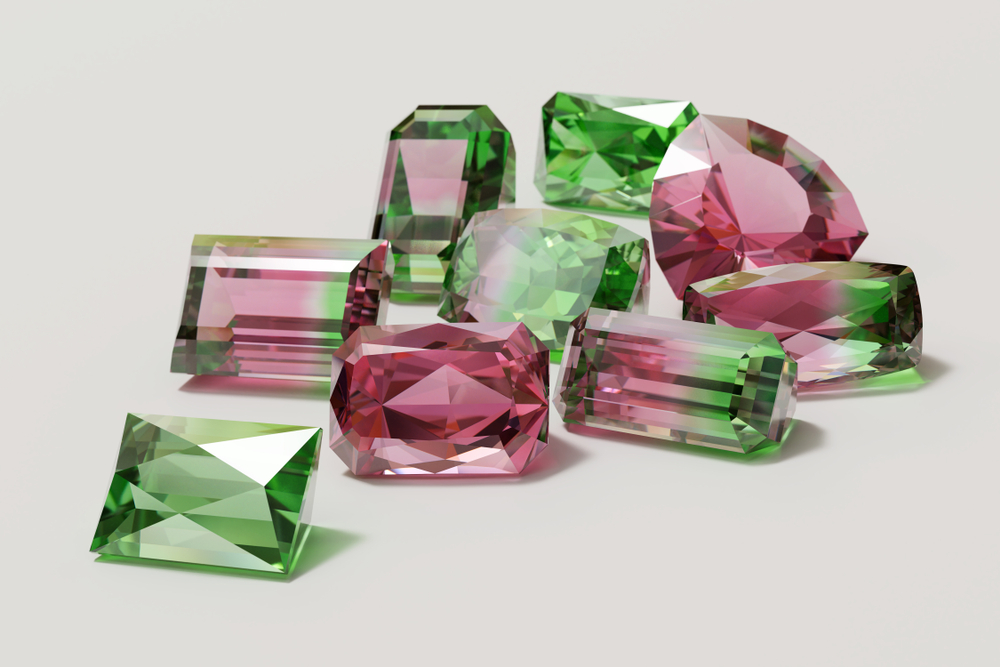 A tourmaline’s chemical composition directly influences its physical properties and is responsible for its color. Tourmalines make up a group of closely related mineral species that share the same crystal structure but have different chemical and physical properties. They share the elements silicon, aluminum, and boron, but contain a complex mixture of other elements such as sodium, lithium, calcium, magnesium, manganese, iron, chromium, vanadium, fluorine, and sometimes copper.

Gemologists use a tourmaline’s properties and chemical composition to define its species. The major tourmaline species are elbaite, liddicoatite, dravite, uvite, and schorl.

Most gem tourmalines are elbaites, which are rich in sodium, lithium, aluminum, and sometimes—but very rarely—copper. They occur in granite-containing pegmatites, which are rare igneous rocks. Pegmatites are sometimes rich in exotic elements that are important for the formation of certain gem minerals. Pegmatites might contain very large crystals up to 1 meter (about 3 feet) in length. Because of the nature of pegmatites, different gem pockets within one pegmatite body can hold tourmaline crystals of very different colors. Or one pocket can produce a variety of differently colored tourmalines. As a result, many mines produce a variety of gem colors.

Another feature of gem pegmatites is the scattered distribution of pockets within them. For miners, working a pegmatite consists mostly of excavating barren rock until the work results in the occasional and sudden reward of a rich pocket full of spectacular gem crystals.

Elbaites offer the widest range of gem-quality tourmaline colors. They can be green, blue, or yellow, pink to red, colorless, or zoned with a combination of colors.

Liddicoatite is rich in calcium, lithium, and aluminum. It also originates in granite-containing pegmatites and offers a diverse array of colors, often in complex internal zoned patterns. It’s named after the late Richard T. Liddicoat, former president of GIA and former chairman of its Board of Governors. He’s often referred to as the “Father of Modern Gemology.” 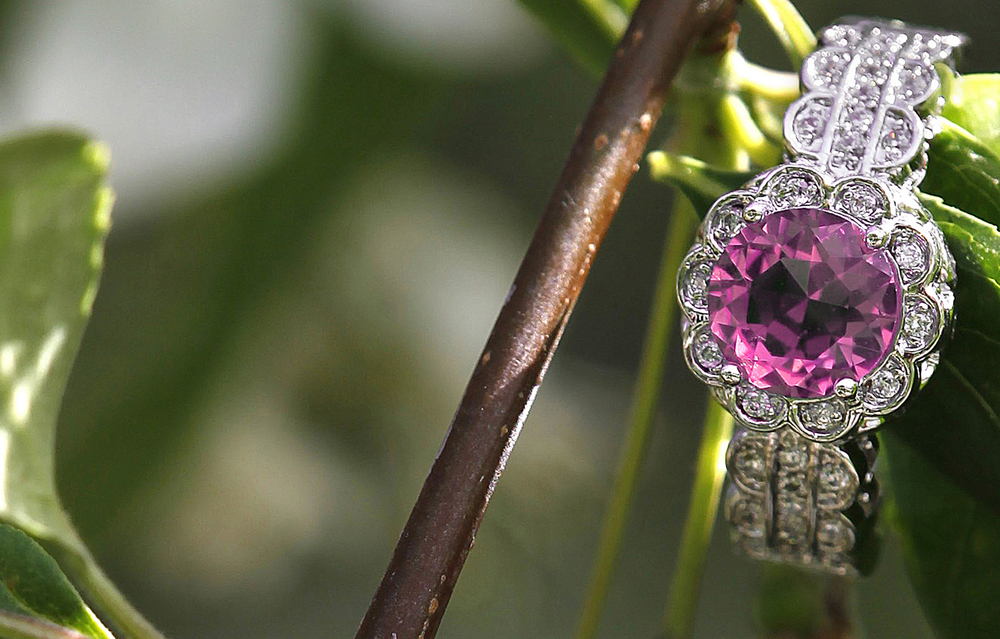 Some of the most important gem tourmalines are mixtures of dravite and uvite. They’re often brown, yellowish brown, reddish brown, or nearly black in color, but sometimes they contain traces of vanadium, chromium, or both. When present in the right concentrations, these impurities produce rich green hues that rival those of tsavorite garnet and, occasionally, even emerald. Dealers sell these gems as chrome tourmaline, even though they’re not always colored by chromium.

The bright yellow gems some dealers call “savannah” tourmalines are also mixtures of dravite and uvite. Their coloring element is iron.

Schorl is typically black, and rich in iron. It forms in a wide variety of rock types. It’s rarely used as a gem, although it has been featured in mourning jewelry.

Tourmaline’s colors have many different causes. It’s generally agreed that traces of iron, and possibly titanium, induce green and blue colors. Manganese produces reds and pinks, and possibly yellows. Some pink and yellow elbaites might owe their hues to color centers caused by radiation, which can be natural or laboratory-induced.

Somewhere in Brazil in the 1500s, a Spanish conquistador washed the dirt from a green tourmaline crystal and confused the vibrant gem with emerald. His confusion lived on until scientists recognized tourmaline as a distinct mineral species in the 1800s. The confusion about the stone’s identity is even reflected in its name, which comes from toramalli, which means “mixed gems” in Sinhalese (a language of Sri Lanka). 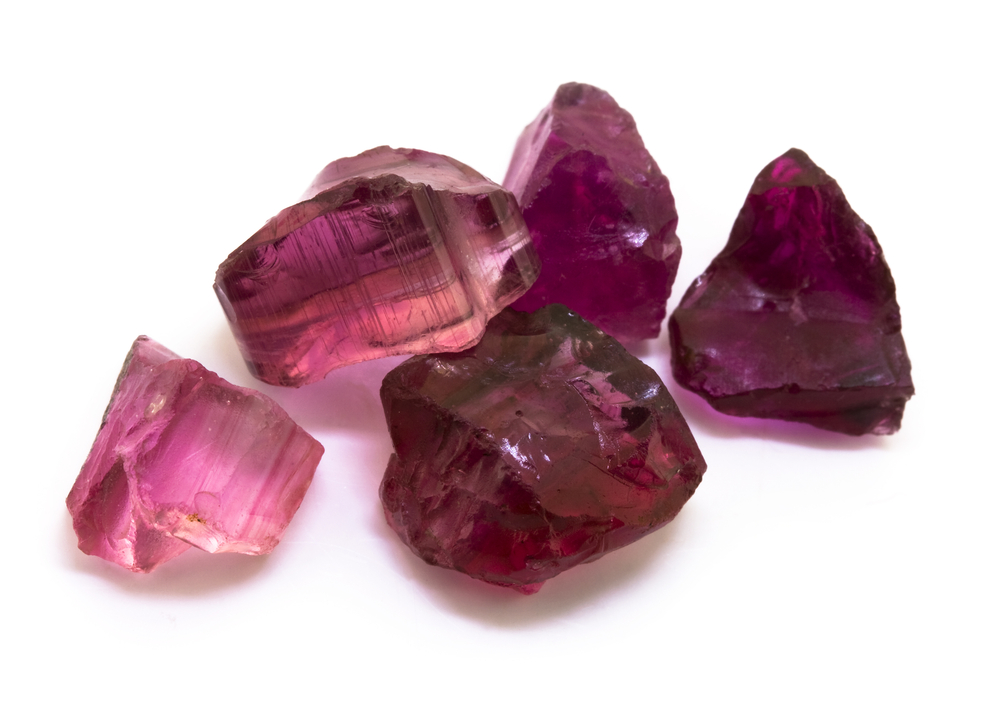 It’s a term Dutch merchants applied to the multicolored, water-worn pebbles that miners found in the gem gravels of Ceylon (now Sri Lanka).

It’s easy to understand why people so easily confuse tourmaline with other gems: Very few gems match tourmaline’s dazzling range of colors. From rich reds to pastel pinks and peach colors, intense emerald greens to vivid yellows and deep blues, the breadth of this gem’s color range is unrivalled. Brazilian discoveries in the 1980s and 1990s heightened tourmaline’s appeal by bringing intense new hues to the marketplace. 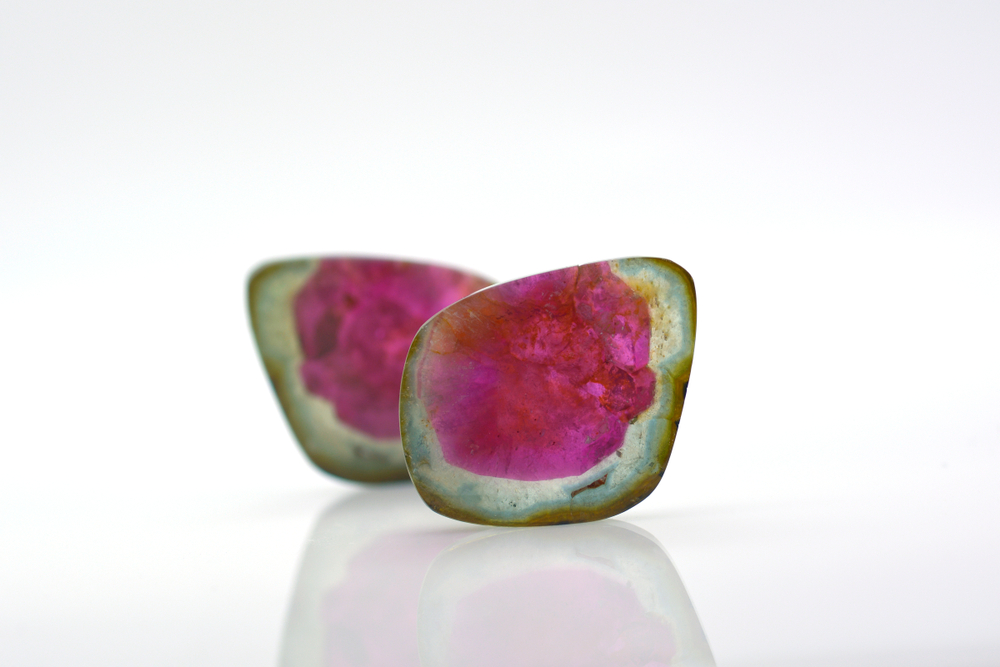 People have probably used tourmaline as a gem for centuries, but until the development of modern mineralogy, they identified it as some other stone (ruby, sapphire, emerald, and so forth) based on its coloring.

One of the earliest reports of tourmaline in California was in 1892. In the late 1800s, tourmaline became known as an American gem through the efforts of Tiffany gemologist George F. Kunz. He wrote about the tourmaline deposits of Maine and California, and praised the stones they produced.

In spite of its American roots, tourmaline’s biggest market at the time was in China. Much of the pink and red tourmaline from San Diego County in California was shipped to China because the Chinese Dowager Empress Tz’u Hsi was especially fond of the color.

There, craftsmen carved the tourmaline into snuff bottles and other pieces to be set in jewelry. San Diego County’s famed tourmaline mines include the Tourmaline Queen, Tourmaline King, Stewart, Pala Chief, and Himalaya.

The miners became so dependent on Chinese trade that when the Chinese government collapsed in 1912, the US tourmaline trade also collapsed. The Himalaya mine stopped producing large volumes of gemstones. Other mines in San Diego County, like the Stewart Lithia mine at Pala, still produce sporadic supplies of gem-quality tourmaline.

The supply of tourmaline began to expand during the first half of the twentieth century, when Brazil yielded some large deposits. Then, beginning in the 1950s, additional finds appeared in countries around the world. Madagascar and Afghanistan have produced fine red tourmaline.

Tourmaline crystallizes in the trigonal system; no other common mineral has three-sided prisms.

Watermelon tourmaline is green on the outside and a delicious pink on the inside.

Tourmaline’s rainbow colors have a wide range of color intensity and tone.

Tourmalines come in all shapes and sizes. The value change for size varies with the variety.